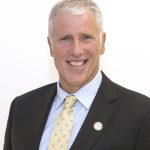 Rev. Paul Brandeis Raushenbush is President and CEO of Interfaith Alliance. An ordained Baptist minister, Paul has been a leader in the interfaith movement to protect freedom and preserve democracy. As the great-grandson of the first Jewish Supreme Court Justice Louis Brandeis and great-grandson of Baptist theologian Walter Rauschenbusch, a key figure in the Social Gospel movement, Paul’s commitment to interfaith advocacy comes in part from his own interfaith background.

Prior to coming to Interfaith Alliance, Paul has served as senior vice president of the Auburn Seminary, the founding and executive editor of HuffPost Religion, associate dean of religious life and the chapel at Princeton University, and a founding editor of Beliefnet.com. Most recently, he was the senior advisor for public affairs and innovation at Interfaith America.

Before hosting State of Belief Radio, Paul was the host of Huffington Post’s podcast “All Together” where he interviewed guests as diverse as President Jimmy Carter, Patti Smith, RuPaul, Bishop T.D. Jakes, and Rabbi Jonathan Sacks.

Paul speaks about religious diversity and the importance of inclusive religious liberty at colleges, churches and institutes around the country including The Chautauqua Institute, the Center for American Progress, the New America Foundation and the Aspen Institute. He is regularly invited to offer commentary on issues of religion and society on national television and radio including a repeated guest on CNN, CBS, ABC, MSNBC, NPR, Al Jazeera, and BBC.