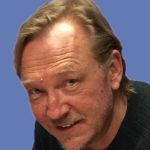 Ray Kirstein is a veteran radio broadcaster who quite literally was born into the medium: at age 6, he debuted in the role of the Easter Bunny on a community radio program produced by his parents in Rochester, NY (that was in the Lithuanian language; English came somewhat later.)  He somehow parlayed this into a career that has included on-air work in five states, several Program Director positions, and four years as a Producer at Sirius Satellite Radio.  As Creative Services Director at Air America Radio, Ray was able to participate in the early days of “State of Belief” by providing the voice of the game show host for the feature “Meet the Faith.”

Ray is passionate about the power of radio as a community-building and mission-enhancing medium, and is excited about the growing potential of the internet to expand this power.  Preserving both the freedom and independence of religion and politics one from the other are driving forces for him – as the son of Lithuanian refugees, he was raised with a deep understanding of what happens when a nation loses both.

Ray has been our producer since 2010. Somehow, in recent years Ray has made his home in Leipzig, Germany while continuing to produce State of Belief Radio.