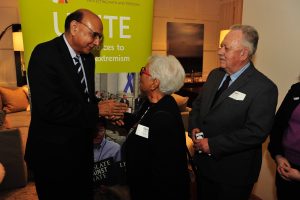 It was an indelible moment from this year’s Democratic National Convention. A quiet man, accompanied by his even quieter wife, rose to challenge the way a leading presidential candidate had dismissed the service and sacrifice of American Muslims. This week on State of Belief, Interfaith Alliance’s radio show and podcast, Gold Star parent Khizr Khan will bring along his copy of the Constitution – and his patriotic conscience – for a conversation about the election and the state of public discourse.

Khan is the father of Humayun Khan, an officer in the US Army who was killed in action in Iraq in 2004. Khizr and his wife, Ghazala, have defied the backlash against their appearance at the DNC and continued to speak out. Host Rev. Welton Gaddy will speak with Khan about the work he is doing to promote mutual respect and non-discrimination. CLICK HERE FOR EXTENDED INTERVIEW VIDEO AND TRANSCRIPT