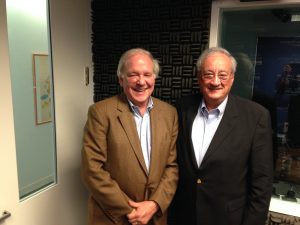 As we grapple with an unprecedented loss of faith in media and government in America, we’ll hear from someone who has navigated both. This week on State of Belief, Interfaith Alliance’s radio show and podcast, we’ll speak with Mike McCurry, who served as President Clinton’s press secretary during some of the most contentious moments in recent political history.

McCurry served as the face of the White House from 1994 to 1998 and fielded questions the likes of which few of his predecessors could have imagined. After a 35-year career in national politics, McCurry is now a professor of theology at Wesley Theological Seminary, where he directs the Center for Public Theology.

Host Rev. Welton Gaddy will take a deep dive with McCurry to draw upon his experience and expertise to help make sense of our current political moment. With President Trump’s approval rating at historic lows and his relationship with the press continuing to deteriorate, you won’t want to miss McCurry’s expert analysis.